We were sorry to miss the meeting of the Proces Constituent in the Porxada in Granollers today. But the square was packed full of people of all ages and political backgrounds.

It is easy to see the bad things about a city like Granollers but how depressing to concentrate on them rather than enjoy the good and the beautiful. That’s why I decided to try and write mostly about the positive things in this blog.

However  ( I was clearly leading up to this) I can’t avoid talking about the rubbish problem.

I am out walking every day and tend to go to the parks, along the river and up to the Tower, all places where other people feel free to toss their rubbish, whether it is large like a sofa, polluting like old cans of paint, or small like coke cans or cigarette packets.

What I find both depressing and fascinating is that here in Granollers there is ample provision of places to put your rubbish. There is a large recyling centre close to the centre for plastics and paper and glass and large objects and paints etc.

There are hundreds of litter bins. Our little square has three all in the space of a few metres 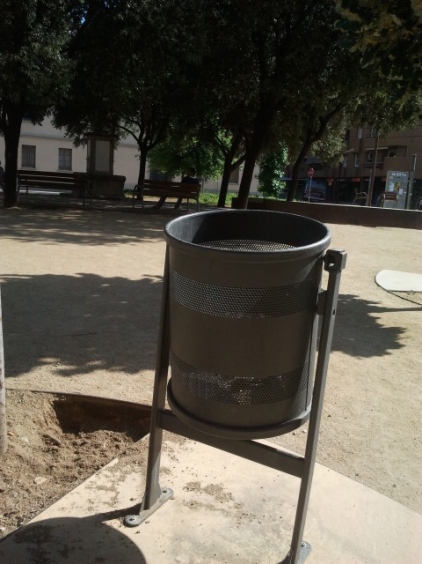 Every street corner has large containers which are emptied regularly 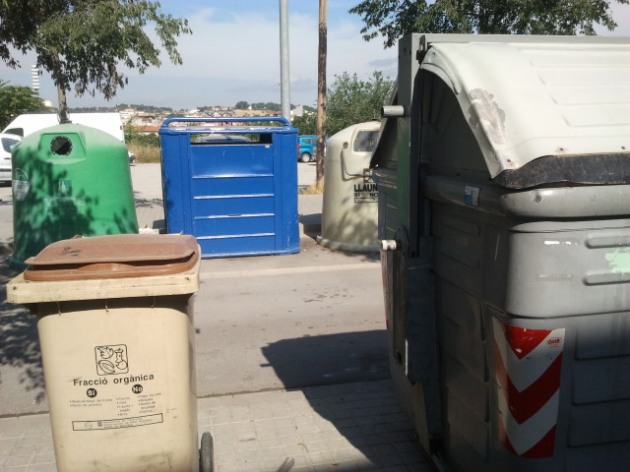 Recently we walked through the Park Lledoner when the wild flowers were at their best. But all along the path there were papers and plastics and bottles and cans.

People make a big fuss about dog shit but frankly who cares?  It is organic and will disappear.  Plastic and metal will be around for the rest of our lives. Unless someone else picks it up.  People here assume that someone else will come and clean the streets. And usually they do. The workers from the council. Or me!

I gathered up as much as my plastic bag would hold 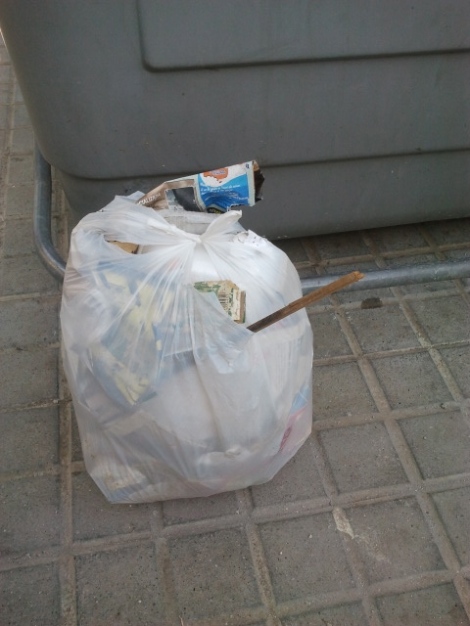 I tried to do it with love rather than cursing the people who dropped the stuff. Who could do this except someone who is unwell in mind or spirit?  Often the worse piles are right beside the bins. Bags of rubbish that are left underneath.  Is this some angry statement of ‘noone cares about me so I won’t care about them’?

Some people stopped and thanked me for doing it.  Perhaps if more of us began to clean the parks and paths then we could change this strange behaviour?  Come on people of Granollers!  Do you really want a British woman to be cleaning up all your messes? The little square near our house is cleaned every morning and yet when I go there with Bonnie at night – it is covered in rubbish again 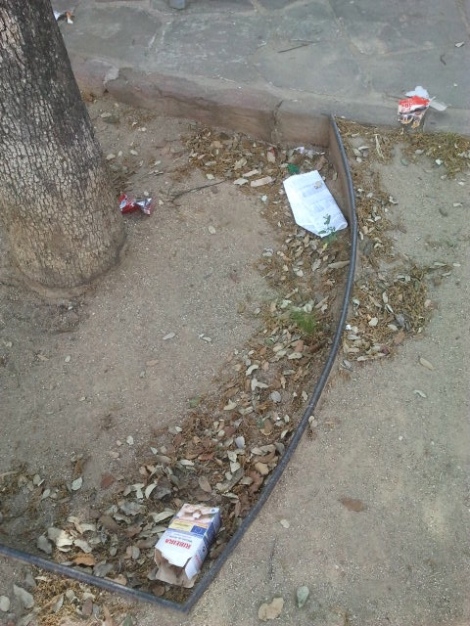 On the positive side thank you the Granollers council for providing so many bins and for organising the cleaning services which are always out on the streets tidying up after the sad minority who can’t walk a few metres to find a bin. 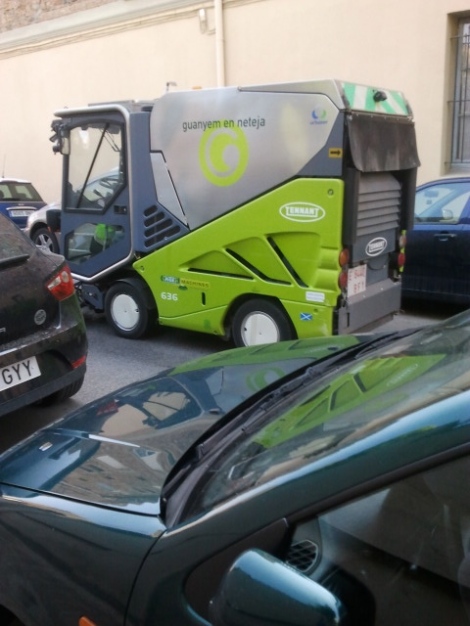 It’s hot and sunny now here in Granollers. That kind of weather makes me want Orxata.

I went to La Perla in the main street and had my usual Cubano – Orxata with a dollop of coconut icecream. The cafe is across the road with the red awning. 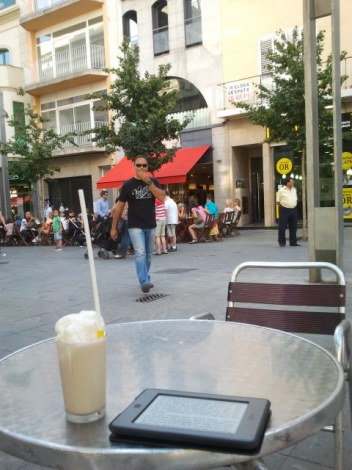 There are people who think the other Orxateria is better than La Perla and how knows they may be right but I usually come here because it is on the main street and I can watch people pass by.

I also come here because it is friendlier….they are friendly to me anyway.

There is more information and some different photos here.

Here we are – it’s Thursday again and the market is in full swing. 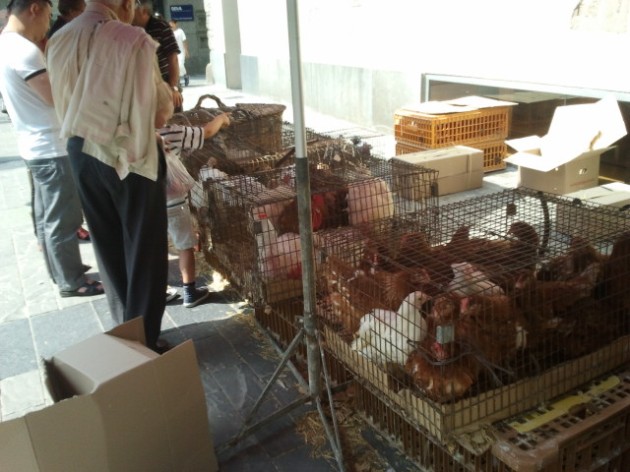 I am too sensitive to their plight and usually avoid this end of the market.  If I had come here in the first part of the 20th century then I would have had to deal with animals of all sorts being bought and sold. Now there are mainly flowers and herbs and olives and a few birds. 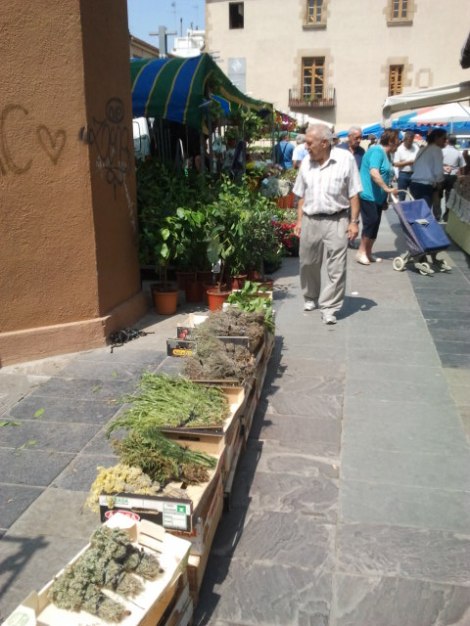 The square outside of the library is called Malluquier i Salvador and was used as the cattle market as in the old days it was outside the city walls.

There are only a couple of stalls selling chickens and ducks and I suppose it could be worse.  People come here from the countryside and perhaps they have gardens and ponds. 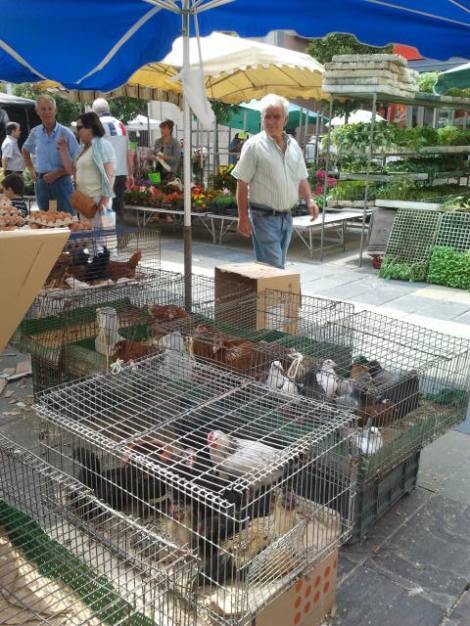 One little boy was asking for a duckling ‘Vull un anac! Vull un anac’ and his mother was about to buy him one. I wonder where it was going to live 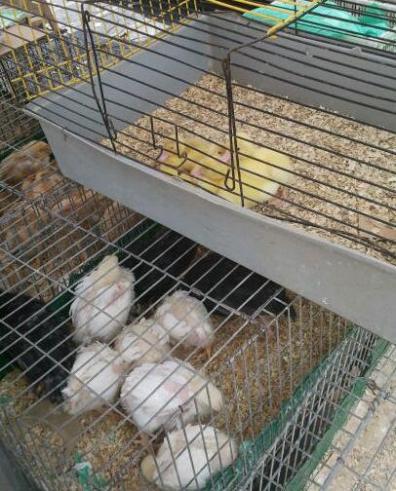 The official name of the square is Malluquier i Salvador and the local name is Plaça de Can Sinia. The library runs along one side of the square and is housed in a historic building called Can Pedrals.  And underground there is a large bomb shelter from the civil war. 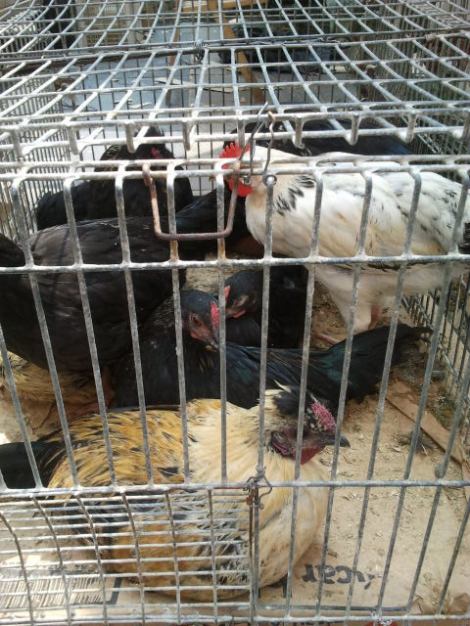 To all the birds in the market – may you find happy homes with good people!

Wherever I live I am always drawn to the health food shops and Granollers is lucky to have several, the biggest of which is Veritas.

It’s actually a chain of supermarkets, started in 2002, and now there are 23 shops in Catalunya.  Veritas was founded by 4 Catalan families with the aim of providing healthy, more ecological and non chemical food. In the UK health shops don’t tend to sell meat, but this is normal here and Veritas has an ecological range of meat products in the chiller section.  Organic meat is expensive in Catalunya  but it’s good to know there is a market for it even though the main supermarkets haven’t taken this on board.

This branch is very friendly and you can have a coffee and cake in their little cafe which is rather basic but ok and has tables by the window. I think a notice board would be a useful addition but that is also not so common as in the UK.

It’s not a cheap option to buy things in Veritas but in general prices are high for vegetarian or ecological products all over Catalunya and here they have a wide range. 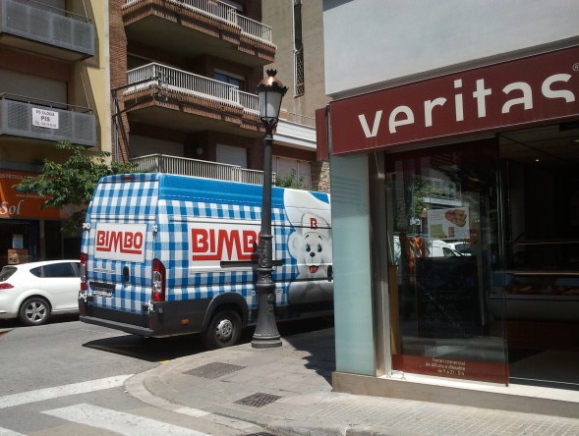 I took this picture because of the Bimbo van. The name always makes me laugh but of course it doesn’t mean the same in Catalan. Bimbo has been producing sliced packaged bread since 1964 from their factory here in Granollers. Before Bimbo this type of convenience loaf didn’t exist in Catalunya or Spain.

This is a flower shop on our street at Carrer de Joan Prim, 101. They are very friendly and helpful and I am welcome whether I am spending a few euros or a lot more. 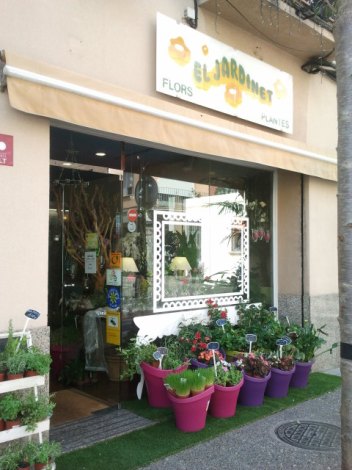 The owners husband is British so she speaks English and she understood when I moaned about the lack of choice in flowers in Catalunya compared to the UK.   For me there are not enough ‘normal’ flowers like roses or anemones or sweet william.  The shops are more used to people buying bouquets for special occasions rather than wanting several cheaper bunches for vases in the house.

However, this shop is my favourite place when I decide to get flowers.

Sometimes a flower is worth more than a thousand words 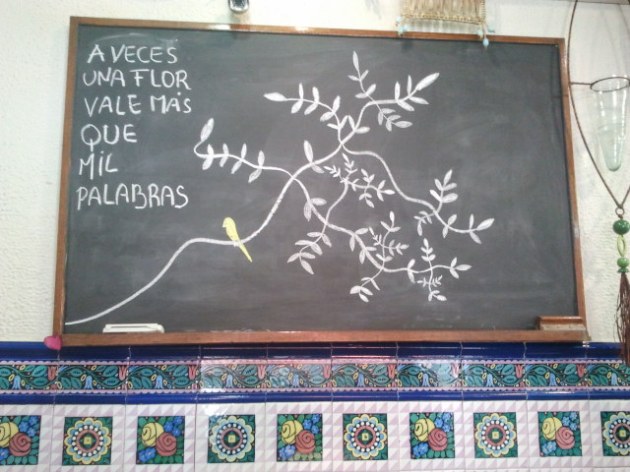 I have dreamt of learning to dance Swing ever since I arrived in Catalunya. There are plenty of classes in Barcelona and earlier this year I went up there every week to do a beginners class of Lindy Hop. But what I really wanted was to dance in Granollers. I knew there were dancers here but they also were always travelling to the big city. It seemed noone wanted to start classes here.

And then….my friend Montse decided to take the plunge and open a school of Swing here at the Roca Umbert Arts Centre. She and her dance partner Miquel teach classes there on Mondays and Wednesdays. See them on stage at the EcoGra on my previous post

Last Spring they did a few events, dancing in the street and handing out leaflets,  and soon there were enough people signed up to run not one but several classes. We are lucky that there is also a successful and thriving swing scene in nearby La Garriga and with the added bonus of a jazz band to play live occasionally, we were off!

More information is available at the Facebook page of Big Potters Swing. 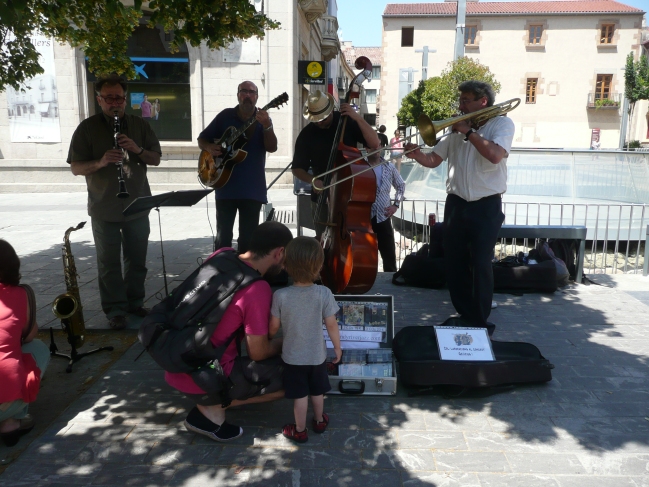 I don’t know who set it up but it is such a good idea. The pages are full of suggestions for how to make Granollers a more creative and colourful place. It is possible. It depends on the people who live here and what they dream of! 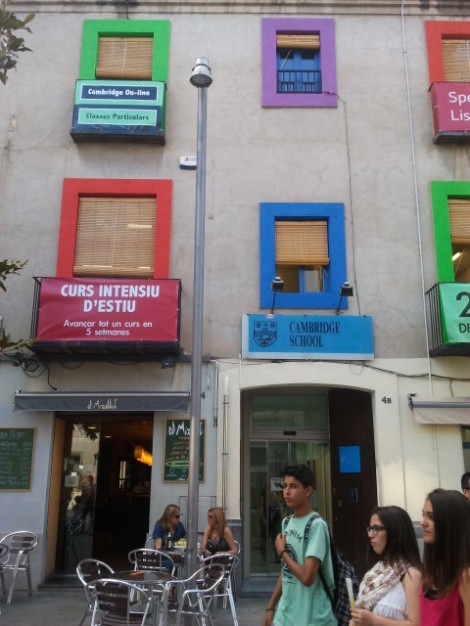 Or acting to preserve the beautiful old buildings rather than see them knocked down to build more flats.

Or even going out wearing clothes in other colours than the predominant black, brown,grey and beige!

Yes I have a feeling Granollers is changing

I want to write about the shops in Granollers where I have found good service. Remember I am not the typical shopper – I look for friendliness above all and especially that the shop keepers don’t treat me like an alien because I am foreign and stumble over my words.

I don’t want to get into naming and shaming or  describing the negative experiences I’ve had (although perhaps I will be tempted sometimes) so these posts will be mainly about the good places I have found.

Saras butcher is hidden away on a quiet back street on Carrer Tarafa. I only recently started going there since starting to feed my dog a raw meat diet. I am vegetarian but do occasionally buy organic chicken for humans 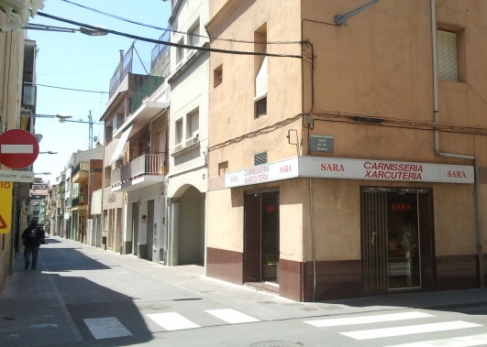 The woman who runs the shop – is she Sara? – is very friendly and helpful. She was genuinely interested in finding things like chicken necks and meaty bones that I can give my dog and she even went out on the street to say hello to her.

There is another butcher closer to home who are polite to me but they don’t smile much or chat at all and I always feel nervous and awkward going in there as it is clear they don’t warm to me.  So I now chose Saras every time and am greeted by a cheery ‘ Hola guapa’ which makes the whole experience much more pleasant. A butchers shop is not the favourite haunt of a long time vegetarian so it is saying a lot that I actually almost enjoy going in there. 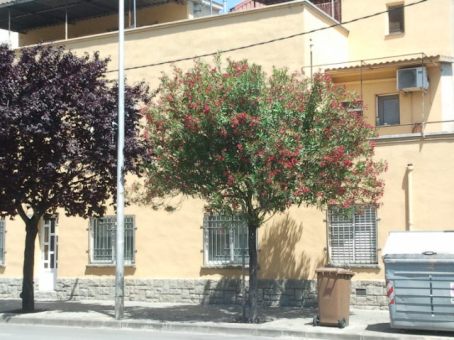 Granollers is full of trees. 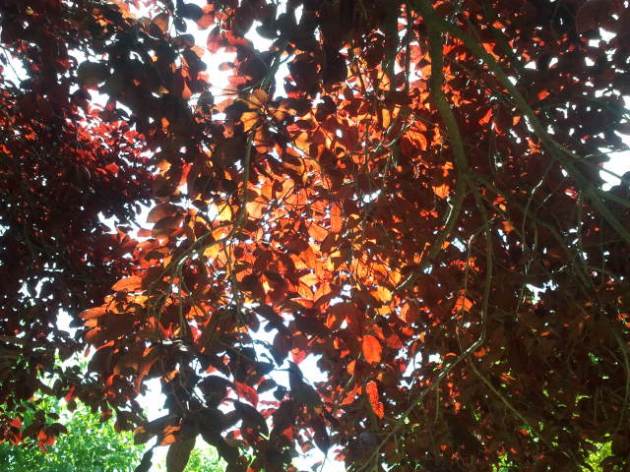 Here are a few of the ones I saw today as we walked down Ramon Llull towards the river and into Park Ponent.  It is a lovely dog walk and not too hot if you look for the trees. 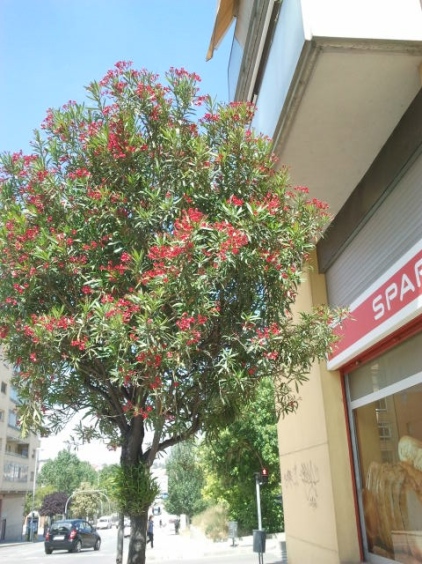 There are shady avenues 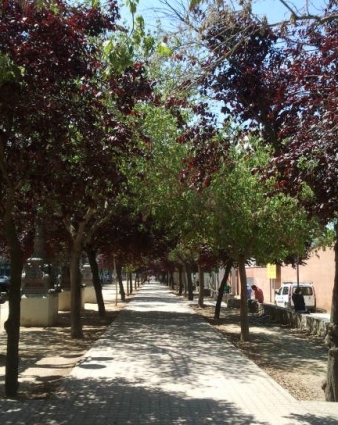 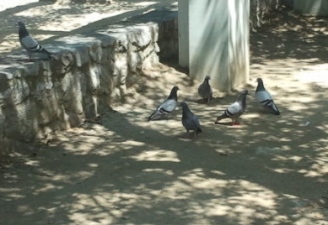 In Granollers there are always ugly things with beautiful things alongside. I’ve learnt to switch off from most of the bad bits 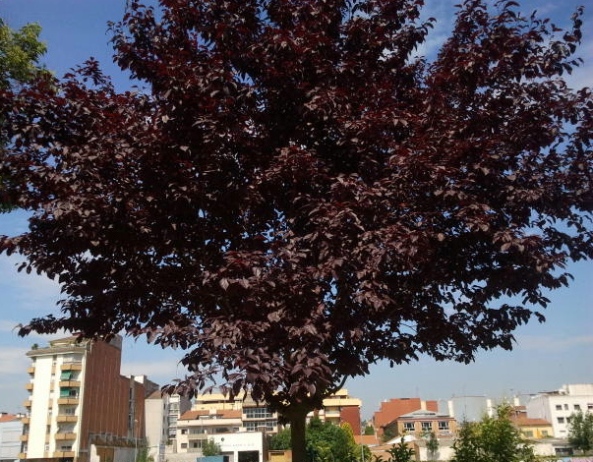 I love the walks by the river. There is often the sound of ducks and frogs and lots of busy birds crossing the water from treetop to treetop 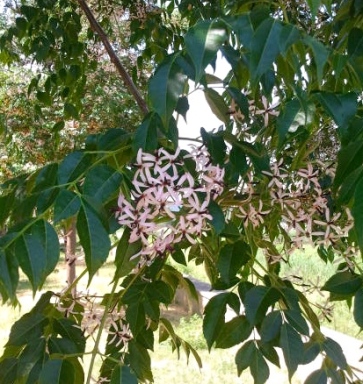 Park Ponent has a large pond as well as bordering the river. 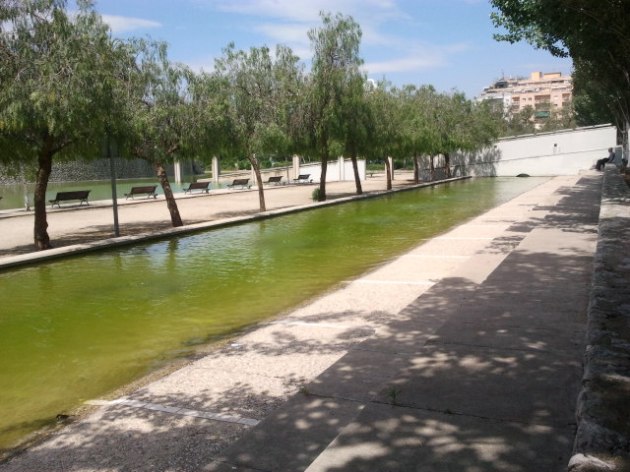 Usually there is hardly anyone there.

All sorts of trees 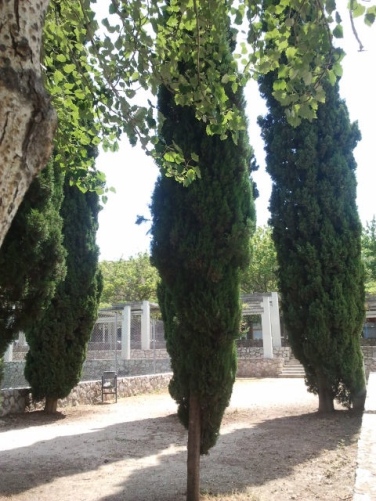 A nice place to sit and contemplate life 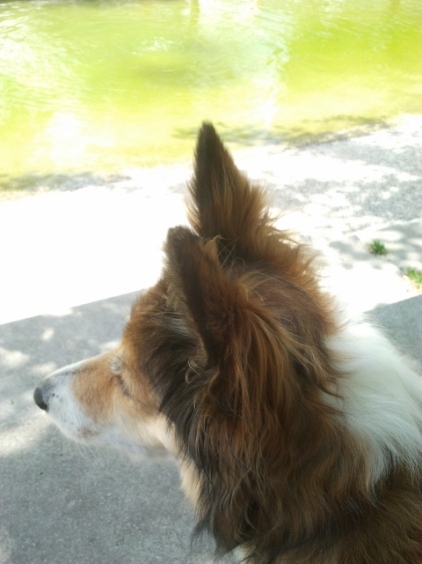 And more blossom on the way home 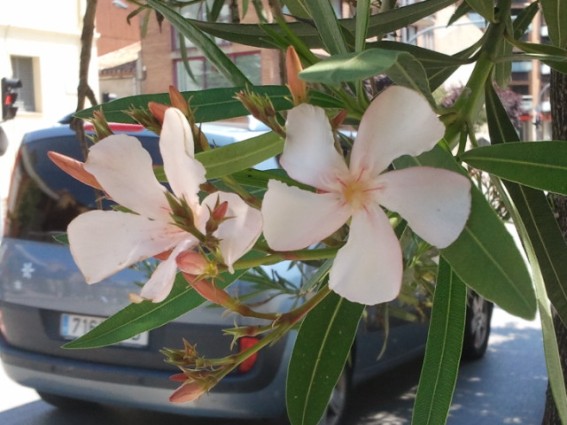 And see the peaceful trees extend
their myriad leaves in leisured dance—
they bear the weight of sky and cloud
upon the fountain of their veins.”
― Kathleen Raine